The eBook, Haskell - Orphan to King - Book 1, is available to you for FREE and is exclusive to the Adgitize Press Readers Group. 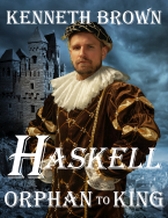 Captured by Gadiel's thugs and thrown into a life of crime, Haskell must learn to survive in the dangerous underworld of the kingdom or face death. But as he navigates the cutthroat world of thieves and smugglers, Haskell discovers that he possesses a hidden talent for magic, a power that Gadiel will stop at nothing to control.

As Haskell struggles to forge his own path and escape Gadiel's clutches, he becomes enamored with Princess Noreen, the beautiful and sheltered daughter of the king. Determined to win her affection and become more than a common thief, Haskell vows to become a lord and prove his worth to the princess.

But fate has other plans for Haskell, as he seeks the help of the spiritualist and fortune-teller, Forest River Blossom, who reveals a future for Haskell that he never could have imagined. As he fights for love and power in a world of danger and deceit, Haskell must find the strength and courage to seize his destiny and claim his place in the kingdom.

You can't get this book at your favorite retailer. The eBook, Haskell - Orphan to King - Book 1, is available to you for FREE and is exclusive to the Kenneth Brown Author Readers Group.